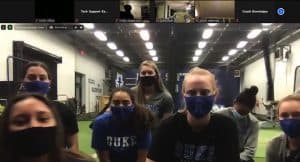 On the field, the coach assumes the role of a mentor inherently. Athletes, as mentees, are called not only to learn from the coach, but from each other, producing a collective sharing of skills and leadership ideals. Special Olympics coaches, as leaders, are integral to maintaining these relationships. Special Olympics athletes first learn to follow, then to lead. In October and November, Special Olympics softball athletes have seen this concept put to practice in three virtual training sessions hosted by Duke University softball players.

An athlete-led experience, Duke players simulate a traditional softball practice session to teach Special Olympics athletes the trade of competing in a Division I varsity program. Athlete to athlete, this peer mentorship opportunity fosters an exchange of sport-related knowledge that carries far past the field.

“We split up in groups of six and do different drills with one person talking and the others in the back demonstrating the drill,” said Duke softball player Kristina Foreman. “We teach them softball skills using whatever they have around the house, like a sock, to practice throwing against the wall.”

Though these sessions are unlike a traditional Blue Devils practice, they are equitably meaningful for all parties involved. The level of engagement displayed by both sets of athletes has contributed to the success of this initiative.

“Going in, we thought that people would not be as engaged in the virtual sessions,” said Foreman. “The athletes were really engaged, and that is so exciting.”

As one of the participating athletes, Special Olympics Davidson County athlete Stephanie Wilkerson was more than appreciative in the efforts put forth by the Duke players.

“It was really good, they did what my softball coach does, but in a different form,” said Wilkerson. “They were all really nice and they told us that they would like us to come to a game one day.”

Marissa Young, head coach for Duke softball, noted the significance of this session for the Blue Devils players. Involvement in community service initiatives, a staple for Duke athletics, allows athletes to form partnerships with programs like Special Olympics North Carolina.

“We are excited for the opportunity to be part of something like this,” said Young. “Experiences like this impact our student athletes and remind them how lucky they are to have the platform and resources they do.”

In the midst of a global health pandemic, that platform has been transformed, but not silenced. Now more than ever, the Blue Devils are leveraging their presence to vocalize the relevance of sports-related activities.

“Being a mother of four kids at home, I have seen how COVID-19 has changed lives,” said Young. “The need for normalcy, interaction with friends and continuing to participate in a sport that they love benefits both physical and mental health.”

Foreman and her fellow teammates echo that sentiment as they continue to show up for their appreciation of the sport and each other.

“We have the hope that eventually we will get to play and are ready to perform as well as we can,” said Foreman. “We may not be able to compete with each other, but we can compete with ourselves to keep getting better.”