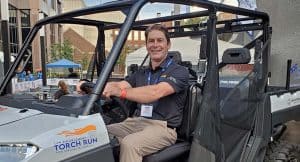 Individuals with intellectual disabilities are, as with many marginalized populations, stigmatized using labels. Special Olympics North Carolina (SONC), a leader in the movement for inclusion, grants athletes the opportunity to be themselves, without the labels. Sergeant Ken Klos-Weller with the Raleigh Police Department is actively working to change stereotypes for law enforcement officers and Special Olympics athletes, hand in hand.

“It kind of snatches at your heart when you work with Special Olympics athletes,” said Klos-Weller. “It just grabs ahold of you and you just continue with it, no matter what brought you to it in the first place.”

The Raleigh Police Department routinely hosts fundraisers, including Cops on Top® at area Chick-fil-As, an annual golf tournament and co-operative, week-long fundraising events with local businesses, such as GNC® and Papa Murphy’s. Officers are also involved in SONC’s statewide fundraisers, like Over The Edge, where individuals raise $1,000 to rappel a 30-story building in support of SONC.

“I did Over The Edge two years ago and it takes some guts to go over that edge and just release and let go, 30 stories up in the air with the wind blowing and everything,” said Klos-Weller. “An event like that, where you see Special Olympics athletes doing the same thing, testing their boundaries and doing everything that they want to do in life is really special.”

For law enforcement officers and athletes alike, working together is a positive experience. Getting to know each other, off duty and off the field of play, these interactions are breaking barriers, building a sense of understanding and trust between each other.

“A lot of people have certain views about law enforcement, but until you actually meet somebody that is in that profession, you may not know what it’s like or what they’re really like,” explained Klos-Weller. “Going to an event like that, a sporting event or a fundraising event, it’s much easier to break through that and see each other as just people, first and foremost, and forget about the labels that everyone is attaching to you, whether it be a police officer or a Special Olympics athlete. We’re just people in the end.”

Klos-Weller began volunteering for Special Olympics when the 1999 Special Olympics World Summer Games were held in Raleigh. Years later, he joined the police force and became a member of NC LETR. Starting out, occasionally attending events, he is now an unstoppable advocate for SONC, planning events, orchestrating fundraisers and befriending athletes. In the many facets of his position working with the Raleigh Police Department, he looks forward to the time he spends with athletes.

“Normally, as police officers, we are interacting with people on their worst days,” said Klos-Weller. “So, to be able to interact with these athletes who are just living their life… It’s really a positive interaction and a great way for officers to see a different side of the work they do.”

Regardless of the uniforms, for law enforcement or Special Olympics athletes, they are people all the same, with ambitions, with goals and with a passion for promoting inclusivity.