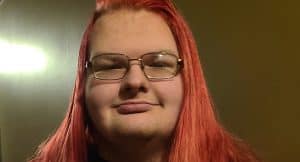 “We definitely get to chat before we play the game,” explained Stipe. “One time, before we played WWE, we got to talk to the wrestlers and each other and all that.”

Partnered with Tyler Breeze, Stipe played a total of four rounds, winning one round. With a fervent dedication to mastering the skills needed to compete in esports, Stipe saw the outcome as an opportunity for future growth. As with any sport, he trains prior to competition, readying himself for a variety of gaming styles.

“If it’s a battle, one versus one player, then I would usually get my friend or my brothers to train with me,” said Stipe. “But, if it’s a team game, I would have the same brothers or my friends help me out.”

Stipe, now 20, began playing video games at the age of 13. He is among the first Special Olympics North Carolina (SONC) athletes to compete in an esports event. When asked about his feelings regarding this distinction, he replied, “I’m okay with making history, but not being popular.”

The event, which was streamed live on Mixer, Twitch and Xbox YouTube, hit 75,000 views on YouTube alone. Following a welcome from NASCAR driver Erik Jones, esports commentators Alie Tacq and Hannah Newhouse reported during the five-hour broadcast. Recordings of the event are available on Twitch, Mixer and YouTube.

“There are two races, two tracks,” said Stipe. “I trained on both of them very, very hard and I still couldn’t perfect the turn on one of them, so that was my downfall. I got third in one of the races.”

No matter the game or competition, Stipe contends that there is always more to learn about the composition of a game and the skills needed to excel in it.

“It could be about be about the story,” said Stipe. “It could be, if it’s a multi-player game, you can get your friends involved to play with you or, if it’s just a game in general and the graphics look cool.”

From behind computer screens, thousands of miles from each other, Stipe connects with other Special Olympics athletes, friends and professional gamers with ease. Navigating race tracks or a virtual wrestling ring, Stipe has his controller and console on the ready.