Home | Feature Stories | The Finish Line and Beyond 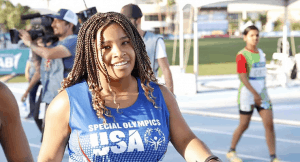 Crossing the finish line is an exhilarating moment. Racing ahead of her competitors, pushing her legs and her lungs, Erykah Culbertson displays her natural athleticism and the crowd responds with their loud cheers of support. Named the 2019 Special Olympics North Carolina Athlete of the Year, she celebrates her success with her supporters.

Erykah knows the power of a positive environment, but what really drives her is one supporter in particular, her older brother, Mikey. Erykah began participating in Special Olympics in 2005, and has since trained in nine different sports to the tune of Mikey’s cheers.

“I just know that Mikey would do anything for me. If I’m struggling, he’s always there to help me and support me. He’s my role model,” explained Erykah.

It is an example that she takes to heart. Erykah is known as an athlete leader in her local program, Special Olympics Cabarrus County. Bringing positivity and always wearing a smile is an essential.

“I try to give my teammates the kind of support that Mikey gives me. I want them to know what that feels like,” said Erykah.

Known for her ever-present smile, Erykah’s father, Michael, said, “People are prone to asking if she ever gets mad!”

“When they said Erykah’s name, we were shocked! Even her coach was fighting back tears!” Michael recalled.

“When we got the call from Special Olympics North Carolina, we were totally ecstatic! It blew our minds,” exclaimed Michael.

Through it all, she keeps her focus on training. Alongside her brother, Erykah has a cheerleader in her mother, Wanda, an energetic training partner in her dog, Boomer, and a competitive trainer in her father. Her father is a Special Olympics coach, leading Erykah as well as other Special Olympics Cabarrus County athletes to victory in basketball, tennis and athletics.

“We do a lot of practicing at home and we’re starting the recommended training regimen right away,” Michael said as they anticipated their departure for Abu Dhabi. “We’ll be going to the gym, getting in some mileage on the treadmill, and weight training.”

Like always, when she steps out on the track before preparing to take off from the starting line, Erykah’s bright smile shines the moment she hears her name being chanted from her fan section. All her training and anticipation will have brought her to that moment, but it is her supporters who help carry her to the finish line.

As she would have been surprised with the award at the 2020 Summer Games Opening Ceremony, its cancellation rerouted those plans. Via webinar, Erykah was presented with the award alongside her family. From a distance, Erykah shared that she is walking four miles a day and using Special Olympics’ virtual health resources to stay active during this time at home, keeping that finish line in mind.