Home | Feature Stories | All About the Smile – The Cote Family 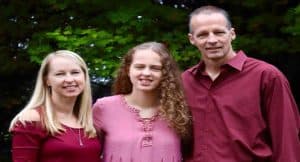 From early on in her life, Special Olympics Forsyth County athlete Makenzie Cote has known what it means to be a competitor. She has her family to thank for that. As she is rather shy in nature, Makenzie’s parents turned to sports as an opportunity for socialization. Little did they know, they would find that and so much more.

Makenzie’s father, Dany, and her mother, Josee, are both French Canadian and moved to the United States over 20 years ago from the Montreal area. Several years later, Makenzie was welcomed into the world as a second-generation French Canadian American.

After learning of her intellectual disability, Josee and Dany began searching for outlets to keep her healthy, intellectually stimulated and, most importantly, happy.

“She started speech, occupational therapy and physical therapy to help with her development,” said Dany. “We always kept Makenzie very active with many sports and social activities, like cheerleading, soccer, ice hockey and baseball.”

Dany enjoys not only cheering from the sidelines, but stepping in as a Special Olympics volunteer as well. For four years, Dany’s employer was a sponsor for the Special Olympics Forsyth County Spring Games. This was just the beginning for the Cote family.

“The experience of being a volunteer is simple to describe in one word – amazing,” said Dany. “It is a nice way to give back to our community and I did like sharing this experience with my coworkers.”

In learning about the Special Olympics community through volunteering, Makenzie’s parents encouraged her to begin training and competing in elementary school. Beginning with ice hockey through a local league, she later traded her ice skates for roller skates to compete as a Special Olympics athlete.

For Makenzie, the race is not about the medal at the end, but the journey to the finish line. As for many other Special Olympics athletes, the real reward is the feeling of accomplishment felt both on and off the field of play.

“I love seeing the smile on her face and seeing how happy she is,” said Dany. “If they finish first or last, it doesn’t matter. That’s not what they are there for. They came in smiling and they leave smiling.”

Through Special Olympics, Makenzie has grown more confident in her social skills and spends much of her free time practicing a variety of sports with her friends. She appreciates an established daily routine and looks forward to school every single day.

“Every night she asks, ‘school tomorrow?’” laughed Dany. “It’s her routine and she loves it.”

Whether it’s dance practice on Wednesday night, baseball on Monday night, hockey on Sunday or training on Saturday mornings, she finds time to explore all of her interests, including theatrical arts. After attending a two-week-long Frozen theatre camp, she was enthralled.

For Makenzie, Special Olympics has been a great motivator to meet new friends, delve into her interests and to ultimately find her voice. For Dany, as both a volunteer and as her dad, he will do anything to keep her smiling.