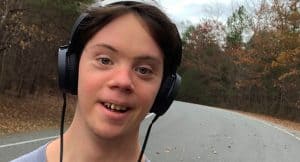 Underneath the shadow of a towering basketball hoop, players narrow in on the 10-inch diameter of the hoop, separating them from a miss and a goal. Special Olympics Union County athlete Micah Biggerstaff, 20, has perfected the art of turning a quantity of throws into quality goals. As part of Special Olympics North Carolina’s (SONC) Winter Challenge Series, Micah materialized his goal of successfully scoring 50 goals in a single day.

The Winter Challenge Series began in December 2020, carrying into January and February, offering fitness challenges to keep athletes motivated, connected and healthy in the colder months. Almost like a halftime event, athletes who chose to participate in the fall Partner Up Power Up fitness program continued to work towards their goals in the Winter Challenge Series before Partner Up Power Up’s relaunch in March.

“One of the goals of the challenge series was to do something and see how many times you could do it and keep progressing,” said Janie Biggerstaff, Micah’s mother. “He loves basketball and sometimes he’ll go out to shoot and aim for 20 goals, sometimes he says 50.”

For nearly 10 years, Micah has competed and trained in basketball, tennis and swimming in Union and Mecklenburg counties. In partnership with Wingate University, Special Olympics Union County offers a spring swimming program for athletes, like Micah. Outside of Special Olympics programming, he is active in soccer, football and baseball with another sports association. Having his active schedule interrupted by the pandemic, Micah has leveraged participation in SONC’s Partner Up Power Up program and the Winter Challenge Series to keep off the sidelines.

“He loves being on a team and is very loyal to his teammates,” said Janie. “He misses them so much… He is a very social being and thrives on interaction. Not being able to hug people is one of the things he misses most. Having the Zoom workout sessions and smaller Zoom sessions with his coach has been helpful and fun to see.”

Visiting with and training alongside other Special Olympics athletes through live workout sessions associated with the Winter Challenge Series and Partner Up Power Up has recharged Micah’s drive to be more like some of the sports legends he admires so much. A proud owner of an extensive jersey collection, Micah finds inspiration in their meaning, their owners’ names and the colors they stand for, especially the Clemson orange that adorns quarterback Trevor Lawrence.

“He’s number 16 and I like him because I do,” said Micah. “I want to get his autograph, he has long hair. I’m going to get his jersey for Christmas.”

Each day, Micah has a broad list of teams to choose from in representing, including the Golden State Warriors, the Charlotte Hornets, the Los Angeles Lakers, the Panthers and the University of Virginia. While it’s Micah’s own abilities that keep his goals close in sight, his daily choice of uniform certainly assists in the motivation of achieving those goals.

“Having a daily calendar has been great to look at,” said Janie. “To have an activity every day and diligently working at that helps all of us. The Zoom sessions have introduced him to so many activities, things he would not normally be doing on his own and to hear from other people that are talking about what Special Olympics means to them.”

In shooting 50 goals in one day, Micah was eager to share his accomplishment with SONC staff and fellow athletes. When asked how he was able to attain this goal, Micah responded, “I just did it.” In commenting that, “I don’t like the pandemic,” he has been working to make the most of the opportunities presented to him.

“We so appreciate all the hard work and effort that has gone into keeping these activities going virtually for our athletes,” said Janie. “Special Olympics is awesome and we are very grateful for all that you do.”

At the free throw line, dressed in his jersey of the day, Micah does not allow the restriction of the hoop’s 10-inch diameter to get in the way of his limitless progress.