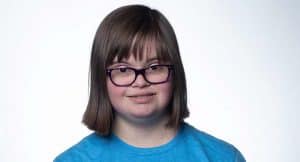 In promoting this initiative, Kelsey was invited to visit the plane months ahead of the Games. She has already picked out an optimal seat for her flight to Orlando. Kelsey will be competing in athletics, representing Team Special Olympics North Carolina, during the Games, held June 5 – 12. After years of training and competing with Special Olympics, she will be showcasing her hard work on a national stage.

“I’m excited, I’m going to Disney World,” said Kelsey. “It’s going to be hot out there.”

She certainly will be bringing the heat to the competition, along with the rest of Team Special Olympics North Carolina. In addition to her uniform, she will be sporting many years of Special Olympics training and a fan section made up of her entire family. Kelsey’s parents, who have both coached her in soccer, will be there to cheer her on.

“Special Olympics has been really good for us,” said her mother, Terri Leyton. “Kelsey has been involved since she turned 11. At that time, she was in softball and then she started soccer and then athletics took over for softball. Last year, I started coaching for soccer. We jumped all in.”

Kelsey and her family are active in their support for Special Olympics on a local, state and national level, including their participation in fundraising efforts. In March 2022, Kelsey represented Team Special Olympics North Carolina at local Jersey Mike’s locations for their Month of Giving campaign, which raised funds for the 2022 Special Olympics USA Games.

At the heart of her involvement, she is running alongside her teammates, striding toward that gold medal every week at practice.

“It’s really important for Kelsey to have that community,” said Terri. “She really looks forward to seeing her friends at practice, she’s a big Dream On 3 fan too.”

Dream On 3, a nonprofit organization that was founded in Kelsey’s hometown of Harrisburg, North Carolina, seeks to make sports dreams come true for children with chronic illnesses, intellectual and developmental disabilities or life-threatening conditions. Kelsey’s dream is to meet Alex Morgan, an American professional soccer player and Olympic gold medalist. That dream is coming true in the near future, courtesy of Dream On 3.

Before that meeting, Kelsey will be competing for her own gold medal of her own. Her personal goals going into the 2022 Special Olympics USA Games are to “get a gold medal and be a leader for my team.”

“This is just going to be an opportunity of a lifetime,” said Terri. “I can’t even believe it. I can’t wait to see what the whole Opening Ceremony is like with all the anticipation of the week and then to see her compete and do her best.”

On the first aircraft  to land in Orlando carrying Special Olympics athletes, she is already miles ahead of the competition.