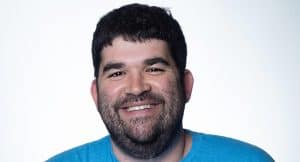 Harpe is employed by the Recreation and Parks Department of Greenville, North Carolina, as a specialized recreation supervisor, where he also serves in the role of local program coordinator for Special Olympics Pitt County, a role he assumed in 2019. Throughout the coronavirus pandemic, Harpe supported local program fundraising in his position, raising over $16,000 in 2021.

“Our local program coordinators do so much in their leadership roles for Special Olympics athletes,” said Fishburne. “Brent is fantastic with the athletes in Pitt County. We’re thankful for his dedication and appreciate the success he brings to his community for Special Olympics.”

The Special Olympics Pitt County basketball team represented Team SONC at the 2022 Special Olympics USA Games in Orlando, Florida, June 5-12. Led by head coach Raymond Henderson and coach Harpe, the team raised over $25,000 to attend the Games, surpassing their fundraising goal of $22,000. At the conclusion of the Games, the team returned to Greenville with a silver medal.

“This was the trip of a lifetime,” said Harpe. “I was really proud of my team. They represented North Carolina and Greenville really well… Five of our eight athletes had never been on an airplane, so that was a once-in-a-lifetime experience for them. Going to Walt Disney World, without Special Olympics, would have never happened for them.”

In 2020, SONC launched the Partner Up Power Up program, a 10-week Unified Sports® training and fitness plan that can be completed from home, without access to internet. Unified Sports programs bring individuals with and without intellectual disabilities together through sports, helping to create communities of acceptance and respect. In the fall of 2021, Special Olympics Pitt County had 118 participants and 123 participants in the spring of 2022.

“I would like to do more Unified Sports programs to get people with and without intellectual disabilities involved,” said Harpe. “I would like to host a Spring Games for the first time in three years and I am starting a youth soccer program.”

In the fall of 2022, Harpe will assist in launching the Special Olympics Pitt County Kick’n It Soccer Clinics for children ages 8-18. Harpe has also worked to support Unified soccer programming through a partnership with East Carolina University Campus Recreation and Wellness. Leveraging community partnerships, Harpe has amplified the impact of Special Olympics in Pitt County.

“Special Olympics means a lot to me,” said Harpe. “It has given me a lot of direction in my career, wanting to help people with disabilities. I believe in the overall message of Special Olympics and of kindness and acceptance.”

About Special Olympics North Carolina
Since 1968, the organization has used the transformative power of sports to improve the lives of children and adults with intellectual disabilities. Nearly 40,000 athletes in North Carolina inspire thousands of coaches, sports officials, local program committee members and event organizers involved in Special Olympics statewide. SONC offers year-round training and competition in 20 Olympic-type sports on local and state levels as well as health and wellness initiatives to improve the health status and increase access to community health resources for individuals with intellectual disabilities. Youth become agents of change through Unified Champion Schools, an education and sports-based program created by Special Olympics to build an inclusive environment among youth with and without intellectual disabilities as well as empower them to become youth leaders and create change in their community. Engage with us on Twitter, Instagram, Facebook and YouTube.