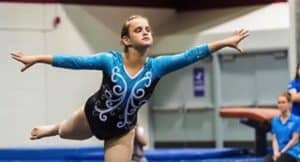 The idea of leaping through the air or balancing on a beam can seem intimidating to some, but for Special Olympics Mecklenburg County athlete Lexi Stern, 23, a fearless gymnast is what she has always wanted to be.

As a younger athlete, she watched her older sister Allie compete for the local gymnastics team and wanted to show that she could do it too, in a way that was accessible for her. With no Special Olympics gymnastics program available in her area at the time, Lexi turned to tennis and basketball where she excelled on and off the court for her talent and positive attitude.

Learning different skills through participation in these sports, such as flexibility, reminded Lexi of the one sport she wanted to train and compete in more than anything, gymnastics. She had always been inspired by her sister and supported her at every gymnastics meet, so when Special Olympics Mecklenburg County launched their gymnastics program, she was one of the first to step on the mat.

“It was the same gym that her sister trained at, and it was such a big deal that she was able to finally do gymnastics,” said Patricia Stern, Lexi’s mother. “It meant so much that she was allowed to do the one sport she had always wanted to do,”

By the end of the season, it was Lexi who was inspiring her family through her love of the sport. Lexi continued to vault to new heights and has become an accomplished gymnast in North Carolina and in the United States, having won a gold medal in the 2017 Special Olympics Summer Games and having competed in the 2018 Special Olympics USA Games in Seattle.

“She always went with the flow, no matter the situation, doing her best and setting a good example for the other athletes,” Vaughn said.

Back home in Charlotte, Lexi has become somewhat of a local celebrity. Whether she is walking her dogs or out with her family, Lexi is a friendly face to so many.

“She knows so many people,” said Patricia. “Everywhere we go Lexi is known. She took a public bus, and someone recognized her.”

Special Olympics has taught Lexi so much, like being comfortable talking with others to giving it your all in everything. It has also taught the Stern family a few lessons along the way.

“It’s an acceptance journey for parents to come to the realization of your child’s abilities,” said Patricia.

The environment Special Olympics seeks to create empowers all of its athletes, like Lexi, to be their best selves and manifest their goals. It is this environment, cultivated within Special Olympics NC, that has empowered Lexi to strengthen her abilities on and off the mat.