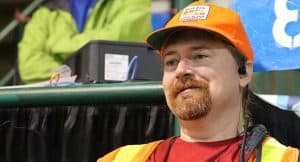 When it comes to transportation services, Special Olympics North Carolina (SONC) volunteer Mike Reese of Garner is on the scene. Reese serves as the transportation director for the SONC Summer Games, a role in which he is able to integrate both his technical experience, as congestion management project engineer for the North Carolina Department of Transportation, and his drive to support Special Olympics athletes. In all that he does, Reese is well-deserving of the 2021 SONC Volunteer of the Year Award.

“If there is a void, whether driving a shuttle or holding a flag, Mike will do it,” said Paul Finks, Volunteer SONC Summer Games Director. “Mike seems to present a calm about him, which keeps others calm.”

Assuming the transportation director position at the SONC Summer Games, he serves in the same role at SONC’s Fall Tournament and Equestrian Tournament. As a member of SONC’s Games Management Team, Reese volunteers year-round, helping to make sports training and competition a reality for the nearly 40,000 Special Olympics athletes competing in North Carolina.

“I cannot think of anyone more deserving of this recognition,” said Todd Brooks, fellow SONC volunteer. “He recruits volunteers effectively because they see his sincere passion for the cause that is Special Olympics and his love of the athletes. While Mike strives for technical excellence in all we do in the transportation realm, he is equally concerned with helping us to always remember the ‘why’ behind what we are doing.”

He was first introduced to SONC through his volunteer experience at the 1999 Special Olympics World Summer Games held in the Triangle. More than 20 years later, his commitment to Special Olympics has not waivered. In 2021, Reese served on the Games Management Team for the fall district invitationals and for the state-level fundraiser, Over The Edge. No matter the task, no matter the event, Reese is able to help.

“He is always willing to help whenever asked and we all know he is extremely thorough and dedicated,” said SONC Senior Vice President Kelly Vaughn. “He consistently maintains a positive, professional presence at all of our events and is a pleasure to work with. He is very dedicated to the athletes and to creating a safe environment for everyone at our events.”

While the essence of technical excellence is a necessity in directing transportation services, Reese takes time to watch Special Olympics athletes showcase excellence as well. Encouraging transportation managers and volunteers to reserve a few moments to watch some of the competition, he shifts the focus back to the athletes, who are the very reason they are there.

“Most of all, Mike simply cares deeply about people and it shines through in all that he does,” said Brooks.

He goes the extra mile for the people he cares about and that is most evident in his relationship with his family. On many occasions, he has recruited his family to attend and volunteer. His son, David, is also part of the Games Management Team, following in his father’s footsteps, inheriting a great sense of direction.