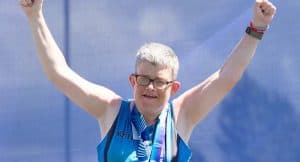 The Special Olympics movement celebrated its 50th anniversary in 2018, reflecting on a half-century of fighting for inclusion for individuals with intellectual disabilities. Nearly 50 years ago, Special Olympics New Hanover County athlete Natalie Robins joined that movement as an elementary school student. Learning of her autism diagnosis at a young age, Robins has dedicated her life to defying preconceived limitations about her intellectual disability and teaching others how to do the same.

Robins attended College Park Elementary School in Wilmington, NC, where she was diagnosed with autism through the school system. Choosing to see this as an opportunity for positive growth, not as a setback, Robins channeled her energy into learning more about how to be the best version of herself, which led to a lifelong venture with Special Olympics.

Competing and training in athletics (track and field), bocce, bowling, softball and swimming through Special Olympics North Carolina (SONC), Robins was the first-ever athlete to become an SONC coach, a catalyst for her role as a Special Olympics leader in North Carolina and on an international stage. In 1999, she even traveled to Japan to speak about her experiences as an athlete. Now an active Global Messenger and member of the SONC Athlete Council, Robins uses her platform as a spokesperson to educate others about Special Olympics and how it has drastically impacted her life.

Grant support from organizations, like Autism Speaks, makes it possible for athletes, like Robins, to train and compete year-round in Special Olympics programming. SONC’s Partner Up Power Up at-home fitness program has allowed for athletes to stay motivated and interact with each other, despite challenges posed by the coronavirus pandemic. Robins is a regular emcee for the program’s virtual fitness sessions, hosted via Zoom, which is just one of many ways she is active in her Special Olympics community.

Prove them wrong, she did. Robins attended a local community college and received a degree in information technology, an accomplishment that would be of great help in her career endeavors. Robins began working for Belk® in 1989, a position she held for more than 31 years.

“When I first started there, I would do data entry,” explained Robins. “They would have bridal sheets, they would circle whatever the bride picked out, like a five-piece place setting or a 20-piece silver set. I would input the data into the computer… I figured, since I was good with computers, why not go after a degree in computers?”

Robins integrated her knowledge of technology into her job at Belk and into her home life, assisting her stepmother and father with any tech-related questions around the house. Her father, who passed away in October 2021, was always a source of support for Robins in conquering the challenges life threw her way.

“I would say, if you have loving and caring parents, do as they say,” said Robins. “They give you the best values and support you need. I feel like I have been very lucky. I have been very fortunate to have a loving family… I would tell people, basically, don’t give up on yourself. Don’t ever give up.”

Despite being told of all that she could not do, Robins set out on a mission to do everything she wanted to do regardless.