Home | Feature Stories | Presenting the 2021 Coach of the Year 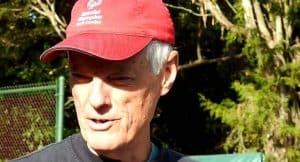 It’s the “David and Marty Show.” At least, that’s what it should be called. Special Olympics Mecklenburg County coaches David Bentley and Marty Ohlhaut have willingly assumed the roles of talk show hosts in the process of engaging athletes in weekly Zoom sessions, allowing for opportunities to focus on physical exercises, social interaction and, of course, the spirit theme of the week. In 2021, Bentley was presented with the Special Olympics North Carolina (SONC) Coach of the Year Award. For his weekly Zoom attendees, he so lovingly calls “Zoomers,” there is no question as to the reason why.

“One day, he and his wife mentioned they were going to help with Special Olympics tennis and I had never heard of it,” remembered Bentley. “They told me about that and I thought that sounded like fun and that I’d like to try that. That was back in 2014. I went with them and I went back.”

After years of coaching on the field of play together, Ohlhaut and Bentley had to adapt to teaching those same skills in the midst of a global pandemic. The two began leading weekly Zoom sessions, following SONC’s Partner Up Power Up program, a 10-week, at-home fitness program for individuals with and without intellectual disabilities. Though they have led athletes through three rounds of this program, the weekly Zoom sessions have not ceased.

“When Partner Up Power Up started again in the spring of 2021, we wanted to come up with some different things, which started discussion groups about sporting events, which morphed into Marty and I presenting a PowerPoint each week on a different topic,” said Bentley.

Still incorporating an exercise routine and information about nutrition, the Zoom sessions evolved into having weekly themes. Some weeks, athletes participate in a show-and-tell exercise, wearing their favorite baseball hat or T-shirt. One week was themed “The Eagles,” named after Bentley and Ohlhaut’s Special Olympics Mecklenburg County basketball team. Athletes were asked to bring an item that represented the theme. One athlete brought a quarter, one athlete brought his collection of Eagles CDs.

“It’s partly about the exercise, but the most important part is the social interaction,” said Bentley. “This is a place where they can meet and spend time with their friends, we always allow a certain amount of time for that.”

Bentley and Ohlhaut have presented on various sporting events, including the 2020 Summer Olympics, college basketball playoffs and football season. In the fall of 2021, they chose a selection of weekly football matchups, asking athletes to predict winning teams for each week and presenting awards to athletes with the winning guesses for that week. Though each week may look different, Bentley is consistent in his approach, to keep the athletes involved.

“The stars, the important people in this are the athletes,” said Bentley. “That’s who it’s about and who it’s for. You get to coach them, but you also become a friend… One of the fun and interesting thinks for me in learning how to coach Special Olympics athletes is watching and talking to the other coaches.”

In his coaching career, Bentley values learning from other coaches and athletes more than anything. He has learned how to adapt, how to be resilient and how to be empathetic. His empathetic nature, years of experience and willingness to learn are just a few qualities that have earned him the 2021 SONC Coach of the Year Award.