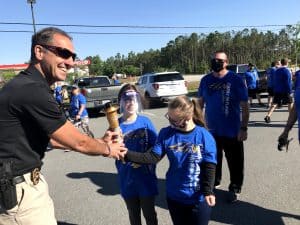 He’s the chief law enforcement officer in New Hanover County, tasked with the enforcement of laws, the prevention of crime and the preservation of order. Since 1991, Sheriff Ed McMahon has been employed by the New Hanover County Sheriff’s Office, serving 12 of those years in the position of sheriff. A substantial workload for anyone, McMahon still constitutes the support of Special Olympics North Carolina (SONC) as part of his personal philosophy and the agency’s.

In 2018, McMahon received the Sheriff of the Year Award, presented by SONC. Just as he was elected by qualified voters to assume his position in law enforcement, McMahon was selected for this distinction as a notable participant in the North Carolina Law Enforcement Torch Run® for Special Olympics (NC LETR). Raising $17,233 in 2018, $42,540 in 2019 and $20,724 in 2020, the New Hanover County Sheriff’s Office is currently ranked in the top 10 fundraising agencies for 2021. For McMahon, it’s never been about being the best, it’s about the athletes.

McMahon is joined by First Sergeant William “Billy” Montjoy of the New Hanover County Sheriff’s Office in recruiting officers to reserve time in their schedules for NC LETR activities. Spearheading those activities for their office, McMahon refers to Montjoy as a “pit bull” in his efforts to keep participants active.

“If you’re around him, you can’t help but catch the bug to want to do it,” continued McMahon. “He’s everywhere, he’s all over the agency and he’s very respected. And plus, I participate as much as possible. We try to tell them, ‘Hey, look, it’s important.’ Nobody is too busy, you can find a little time to do it…”

“Sheriff McMahon, truly loves the athletes of the Special Olympics North Carolina,” added Montjoy. “It is a joy watching his face light up whenever they are around. He allows us the freedom to raise funds and is always 100% involved in our efforts. His leadership inspires us to be bigger and better each year. It is an honor to be allowed to raise awareness for this awesome cause under his direction.”

Making that time means opening doors for more impactful moments, more memories and more connections between officers and athletes. Like McMahon said, it only takes a second, a moment, to get hooked. It’s all about making time for that moment to happen.

“For me, personally, the athletes are just so sweet and I think it softens us in law enforcement,” explained McMahon. “We deal with so much negativism and criminals and just bad stuff…They look at us and they see our badges and it represents authority to them. For us to have that positive impact and to kind of mentor and to be role models, I think it’s a win for us and it’s a win for the athletes too.”

McMahon has a great vision for his agency. That vision becomes a reality by committing more time to be present for Special Olympics athletes. Clearing his calendar to make routine appearances at NC LETR functions, McMahon encourages officers in his agency to do the same.

“I don’t want to get too busy that I miss the functions and the opportunities to engage myself,” said McMahon. “For me, it’s a commitment to make sure that I put the time and effort in that I need to… For me, I just want to make sure that we stay involved and, of course, you always want to do more and more and get bigger and better.”

Amidst a schedule packed with law and order, McMahon contends that he is never too busy to appreciate the moments he shares with Special Olympics North Carolina athletes. McMahon has been elected to serve as sheriff of New Hanover County for four consecutive terms, a testament to not only his excellent time management skills, but his character.