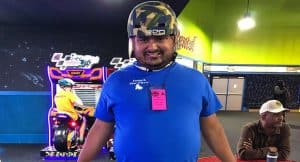 There is a definite rhythm to mastering the sport of roller skating. A significant part of maintaining that rhythm is balance. Luckily, for Special Olympics Forsyth County athlete Emmanuel (Manny) Zayas, he quite simply never loses that balance.

“I never, ever fall,” said Manny. As a matter of fact, he finds balance in all aspects of his personal life, career and musical endeavors.

Medals in tow, Manny was looking forward to showing his accomplishments off to his fellow coworkers back home. For nearly a year, he has been working at Moji Coffee Shop in Winston- Salem. Serving up a variety of specialty drinks, baked goods and deli items, Manny has mastered the recipes behind the menu.

“Yes, I know how to make all of the drinks,” said Manny. That’s quite an impressive feat as customers have so many to choose from, including a pumpkin pie frappe, hazelnut chai latte and maple pecan cappuccino.

Aside from its delicious treats, Moji Coffee House is backed by an even more impactful mission: to provide meaningful employment to individuals with intellectual disabilities. The slogan for the coffee house is “The Coffee that Gives Everyone a Voice.” Manny takes that slogan quite literally, but translates his voice to music instead.

Manny has been playing piano for 10 years. As for his inspiration, he looks to his older brother, Nick, who teaches theatrical arts at R.J. Reynolds High School in Winston-Salem.

“I am just really glad that I get to have a sibling,” said Manny. “We like to go to a lot of musicals, but my favorite is Peter and the Starcatcher.”

When he is not watching others perform, he is practicing piano in his weekly lessons and playing a diverse range of genres.

“You want to know what my favorite kind of music is?” asked Manny. “I really love hip hop and rap.”

Two unseemly genres for a classical pianist, Manny contributes his own unique flare to his talent along with the help of his piano instructor, who has been working with him weekly to grow his skill set.

“My favorite songs to play are by the Beatles,” said Manny. In learning about his expertise in the realm of music, it seems that Manny finds interest in each genre that he encounters. Whether it is “Blackbird” by the Beatles or beats to his favorite rap song of the week, he savors the rhythm.

Manny is all smiles when talking about his career at Moji Coffee Shop, his musical talents and his passion for roller skating. On top of it all, he finds time to excel in his other part-time job at Lowes Foods.

One day, Manny aspires to perform for his coworkers and Special Olympics teammates, sharing his ingenuity for musical arts with those that support him in his other successful ventures.