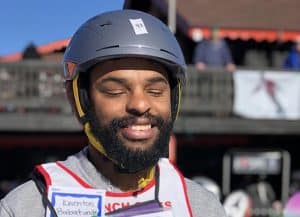 “See, I’m not very good at running because I’m short,” I laughed. “You’re a lot taller than me.”

“Sure, you can feel where the top of my head is,” I said as I directed his ski gloves to my hat.

In working with Special Olympics North Carolina on staff, the most rewarding aspect of our job involves working directly with athletes. As the Director of Communications, it is my privilege to write their stories.

I met Kwenton Babatunde at the 2020 Special Olympics North Carolina Winter Games – Alpine Skiing & Snowboarding at Appalachian Ski Mountain. After a few moments of speaking with him, I noticed that his ski bib differentiated from the others. Although his bib may read, “Blind Skier,” his perspective of the world around him is crystal clear.

As the conversation carried on, it did not take long to see how the uniqueness of his uniform extended to his overall persona. Kwenton, an Alpine skier with both an intellectual disability and a visual impairment, has the exceptional gift of recognizing the potential and talents in others without the advantage of traditional sight as his guide.

“My best friend in Special Olympics is Jennifer,” said Kwenton. “I have no idea what she looks like, but I know she is funny and loud.”

In listening to Kwenton talk about his family and friends, his gift for reading others became quite evident. For Kwenton, he sees them as them as the absolute best version of themselves. His positivity radiates from friendships to the essence of sportsmanship as a Special Olympics athlete.

From navigating ski slopes, to sprinting a track and cycling through a course, he takes the word “ability” and puts it to action. He is persistent in defeating stereotypes surrounding those with intellectual disabilities.

“I never thought I’d do cycling,” said Kwenton. “I didn’t know how to ride a bike. I started on a lowrider and my coach was behind me telling me which way to go.”

For many, this scenario would equate to that of the world’s most terrifying trust fall. For Kwenton, this is nothing outside the realm of normal.

“How did I learn how to ski?” he repeats my question. “I was taught by my old friend, Sam. The people standing at the bottom of the hill, when they see me coming, they yell at me to slow down. I’m going at full force”

In practice, Kwenton uses verbal cues from others around him as directional signals. He relies heavily on their expertise in order to determine the most effective ways to maneuver. That said, he effectively maneuvered his way to earning a silver medal at the 2020 SONC Winter Games – Alpine Skiing & Snowboarding.

Off the snowy slopes, he spends his time by the ocean. Fishing pole in hand, he casts a line into the Atlantic Ocean and waits for movement.

“I fish out in the Outer Banks,” said Kwenton. “I fish for what I can catch, like sea bass, that’s dinner.”

In high school, Kwenton attended classes with other students with visual impairments. Many a lunch was served with the aid of his fishing pole.

Today, Kwenton lives with his roommate, Maurice, and is close with his family who lives in Winston-Salem.

“I have brothers and we all get along,” he smiles. “They are not in Special Olympics, but they are proud that I am.”

To know Kwenton is to know courage. This is but only one piece of the Special Olympics mission he embodies on a daily basis. He reflects joy as he shares his strengths with those around him and carries an appreciation for what he sees in those he loves most.

At the conclusion of our conversation, he presented me with a small toy car. After holding it in his hand for several seconds, he determined it was a Chevrolet Impala.

For nearly a decade, Chevrolet has celebrated their tagline, “Find New Roads.” While almost any course is seemingly new for Kwenton, his vision for charting it is his greatest strength.