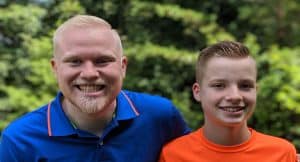 A nuclear family can be described as a couple and their children, composing a singular social unit. That definition grays in becoming part of the Special Olympics North Carolina family, one comprised of coaches, volunteers, teammates and fans.

When Special Olympics Guilford/High Point parents Ida and Chris Shaw registered their two sons to compete with the local program, their family grew by hundreds. Twenty-one-year-old Drew, began training at the age of 8, followed by his younger brother, Derek. With a support system set in place, they dove headfirst into training.

“My husband and I were both athletes growing up,” said Ida. “There is an eight-year difference between our sons and we saw Special Olympics as an avenue to be part of the sports community. We saw it as a long-term opportunity.”

Primarily focused on swimming and cycling, Derek and Drew ventured into roller skating, golf, bocce and basketball for brief periods of time. For Special Olympics Guilford/High Point Local Program Coordinator Stephanie Hedgecock, their evolution as athletes and as individuals has been an honor to be a part of. As Drew’s first swim coach, Hedgecock wears many hats, including that of secondary mother.

“I will never forget taking him to Summer Games away from his parents for the first time,” remembered Hedgecock about Drew. “The Shaws are good about letting them go with us independently and function without them being there. They are respectful of the fact that they are on a team and they need to be with their team.”

Trust was never lacking for the Shaw parents. Special Olympics Guilford/High Point quickly became a place of belonging and acceptance.

“The first time that Drew went to Summer Games, we never even thought twice about it,” said Ida. “We trusted them completely and he was 10 years old. They had already built that trust.”

Within their local program, Ida is appreciative of the many people who consistently give their support and show their love, even off the playing field.

“One year, I was at the aquatic center during Summer Games and I got a call from my mom saying she was about to go into surgery,” said Ida. “She did not think she was going to make it. I just remember pacing. I think back to those Summer Games and thinking that I was in a place that was safe with families praying with us and loving on us.”

Ida is a nutritionist with the Guilford County Women, Infants and Children (WIC) Program. Of the 14,000 families on their caseload, she works closely with many parents who have newly diagnosed children with intellectual disabilities.

“I try and encourage them to seek what is out there,” she said. “The journey is not always what they thought it would be, but I always try and push them to Special Olympics.”

The Shaw parents recognize that they are not the only influences in raising their children. Luckily, they have surrounded themselves with a blanket of encouragement.

“I try to say that it’s about sports, but it’s also about the community and independence for their child,” said Ida. “You need a community to do life. For us, we needed a community and even more. It takes a village and then, sometimes, the village next door.”

Today, Drew remains an active competitor with Special Olympics Guilford/High Point. Derek’s focus has shifted through his recent transition into high school to musical avenues as a guitar player and producer. Though the brothers no longer share the field of play, Ida is forever grateful for the organization that shaped them into the confident men they have become.

“The dances and opening ceremonies at state-level competitions will always be my favorite,” said Ida. “Every time the cauldron is lit, you can’t help but cry. You look out across a sea of people and see a joy that is beyond measure.”

That sea is a wave of many villages, cultivating and nurturing an ecosystem of individuals who have come to call themselves an interconnected family.