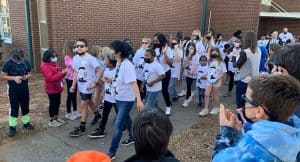 During Inclusion Week at Beverly Woods Elementary School in Charlotte, North Carolina, students with and without intellectual disabilities walk hand in hand, parading through the school, in what is called their “Buddy Walk.” As a member of the Special Olympics Unified Champion Schools® program, the Bear Buddies initiative at the school was established to form connections between students without intellectual disabilities and students in Exceptional Children (EC) classrooms.

Bear Buddies are fifth-grade students who have applied to offer additional support and spend time with students with intellectual disabilities on a daily basis. For this year’s Inclusion Week, which took place Feb. 28 – March 5, Bear Buddies wore custom shirts, designed by one of the EC students and participated in the Buddy Walk.

After completing the application and training process, Quinn Nash, Harper Lucke and Moksh Jain all became Bear Buddies at Beverly Woods Elementary School. Jain’s sister, now in middle school, has an intellectual disability and had a Bear Buddy during her years at the elementary school. As current Bear Buddies, these students are an example of how important learning the power of inclusion can be at such a young age.

“We wanted to make the students here that have a disability feel included,” said Lucke. “Last week, we all wore different colors and on Friday, the Bear Buddies all wore shirts like the one Jain is wearing and we walked around with all the [EC] students. I felt really happy because I felt like I was doing something great for them and I hope that they had an awesome time.”

The entire school is invited to attend the Buddy Walk; however, only Bear Buddies and EC students walk in the parade. This year, Bear Buddies wore a shirt designed by one of the EC students featuring a cartoon character and the phrase “Champions of Change.” The cartoon character, his signature drawing, sports a broken finger, in honor of one of the EC teachers with a broken finger herself.

“When we went all around the school, everybody was clapping and waving at everyone and one of the students I was walking with, he was so happy,” said Jain. “I feel like it was really fun that I finally got to be in the walk than just look at it.”

“I liked how it wasn’t just a few people who got to do it,” said Nash. “It was a lot of people. If you didn’t get to do it, you got to watch the people do it… The fact that we go to a Unified school, it makes me happy and it makes me proud to go here.”

Nicole Jones is the physical education (PE) teacher at Beverly Woods Elementary School. As a former teacher’s assistant in an EC classroom, Jones is an advocate for the Bear Buddies initiative, encouraging students to learn more about how they can make a difference in their own school.

“We are very proud of them, not just during Inclusion Week” said Jones. “Everyone carries it on through the year, it is something that is part of the culture of this school. You come in wanting to be a Bear Buddy, wanting to help and wanting to learn more.”

Bear Buddies are integrated into EC classrooms and into adaptive PE classes, fully immersing themselves in an inclusive environment. Next year, Lucke, Nash and Moksh will be middle schoolers, taking the principles they have learned through the Bear Buddy program to their next chapter in life, making friends and celebrating differences.

“I think it’s a very special bonding when you are friends with them,” said Lucke. “You’re never going to have a friend like that and I think it’s so awesome. I enjoy seeing all their smiles when I’m playing with them and I, in fact, smile myself.”