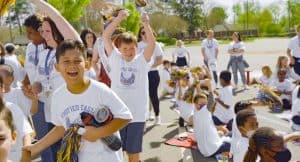 On Wednesday, April 6, Special Olympics North Carolina (SONC) hosted a national banner presentation for Idlewild Elementary School in Charlotte, North Carolina, for their efforts to provide inclusive sports and activities for students with and without disabilities as a Special Olympics Unified Champion School®. A Unified Champion School receiving national banner recognition is one that has demonstrated commitment to inclusion by meeting 10 national standards of excellence. These standards were developed by a national panel of leaders from Special Olympics and the education community.

“I was able to attend a Unified Champion School conference in Greensboro a few years ago,” said Lauren Schwoebel, elementary extensions teacher and EC (Exceptional Children) compliance facilitator. “I got the opportunity to hear ideas from different schools, some of which were already national banner schools. I was able to put some ideas into place.”

Some of those ideas have included a schoolwide autism awareness T-shirt, pep rallies and the implementation of Unified Sports® teams for soccer and cheerleading, where both students with and without intellectual disabilities compete alongside each other on the same team.

“We were able to create a Unified Eagles Club, where we would have students from fourth and fifth grade classes, who wanted to, have the opportunity to come in and interact with our [EC] students,” said Schwoebel. “To go from them not understanding or not knowing, to everyone interacting, it’s so inclusive. It’s one big community.”

Unified partners, individuals without intellectual disabilities, support Special Olympics athletes by attending their competitions and events, cheering them on from the stands.

To recognize their extensive efforts, the national banner celebration featured a Unified Eagles Club breakfast with special guests, a schoolwide parade, the national banner unveiling and a dance party, complete with a visit from Miss Gastonia Outstanding Teen, Lorelie Elberson, and a video message from Miss America, Emma Broyles. Guest speakers at the celebration included SONC President/CEO Keith L. Fishburne and James Estes, Regional Representative for U.S. Senator Thom Tillis. Estes presented the school with an American flag that had been flown over the U.S. Capitol prior to its presentation.

Idlewild Elementary School was also recognized as one of the top five Hasbro, Inc. schools in the country and received an additional $5,000 toward their ceremony celebration from Hasbro. Hasbro has partnered with Special Olympics since 2016 in support of global youth programming and the goal of building a kinder world where all kids are included. Hasbro, a global play and entertainment company, leads with their purpose of making the world a better place for all children, fans and families

Beginning in the pandemic, Idlewild Elementary Schools students have continued to participate in SONC’s Partner Up Power Up program. This ten-week training program is Unified so both individuals with and without intellectual disabilities can train together. It can be fully done from home with materials provided and online resources available.

“The school has utilized Partner Up Power Up as a supplemental resource for the entire school,” said Lilly. “Over 500 students have participated in the program.”

Each school will proudly display their banner, joining a select list of schools from across the country, each doing their part to promote inclusion in their classrooms and in their communities.