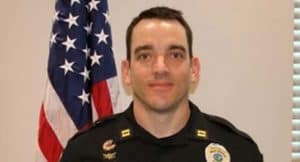 Patterson, who was nominated by the NC LETR Council, is the only North Carolinian selected to run with the Final Leg Torch Run Team as a Guardian of the Flame®, running the Flame of Hope throughout Florida leading up to the Opening Ceremonies of the Games on June 5 in Orlando.

Final Leg runners from around the country were selected to represent their local Torch Run and Special Olympics Programs, honoring the spirit of the Special Olympics global movement and delivering a message of hope to communities where people with intellectual disabilities continue to fight for acceptance and inclusion.

The Law Enforcement Torch Run for Special Olympics is Special Olympics’ largest grass-roots fundraiser and public awareness vehicle in the world. Nearly 100,000 law enforcement members in all 50 U.S. States, 12 Canadian provinces/territories and 44 countries contribute to LETR efforts annually as Guardians of the Flame, ensuring the delivery of the Special Olympics Flame of Hope to the Opening Ceremony of local Special Olympics competitions, state/provincial Games and national/regional Games.

Patterson is an administration and support captain for the Holly Springs Police Department and has spent 21 years in law enforcement. Prior to his career in law enforcement, he served 22 years in the military. Seven years ago, Patterson got involved with the NC LETR and has helped raise nearly $200,000 for Special Olympics North Carolina (SONC) during that time.

“I really don’t have words,” said Patterson about his selection. “It’s one of the biggest rewards I’ve ever been handed in my life… I can’t find the words to describe what an awesome honor it is to represent law enforcement and these athletes.”

About Special Olympics North Carolina
Since 1968, the organization has used the transformative power of sports to improve the lives of children and adults with intellectual disabilities. Nearly 40,000 athletes in North Carolina inspire thousands of coaches, sports officials, local program committee members and event organizers involved in Special Olympics statewide. SONC offers year-round training and competition in 20 Olympic-type sports on local and state levels as well as health and wellness initiatives to improve the health status and increase access to community health resources for individuals with intellectual disabilities. Youth become agents of change through Unified Champion Schools, an education and sports-based program created by Special Olympics to build an inclusive environment among youth with and without intellectual disabilities as well as empower them to become youth leaders and create change in their community. Engage with us on Twitter, Instagram, Facebook and YouTube.