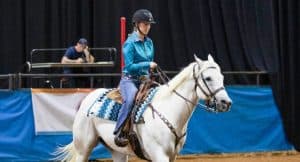 Special Olympics Durham County athlete Leah Glazer has earned quite the list of accolades in her 10 years competing with Special Olympics North Carolina (SONC). Among the list, there are three gold medals from the 2019 SONC Equestrian Tournament and a gold medal in advanced tumbling at the 2019 SONC Cheerleading Competition. To ensure an athlete’s safety competing in any sport, their overall health becomes a critical component.

In June 2022, Leah represented Team SONC competing in equestrian at the Special Olympics USA Games in Orlando, Florida, where she was coached by her mother, Special Olympics Durham County coach Heather Glazer.

During the Games, an immense medical team worked to provide various Special Olympics Healthy Athletes® screenings to athletes, like Leah. The Special Olympics Healthy Athletes program offers free health exams and educational resources to adults and children with intellectual disabilities. Throughout the Games, over 12,000 exams and treatments were provided to 5,500 athletes between the ages of 13 and 80.

“I was blown away by the scale of the services that were being offered,” said Heather. “Each station took 45 minutes to an hour, because there were multiple stations within each one.”

One of the stations, operated by Unified Imaging, allowed medical professionals to take a comprehensive picture of the inside of the eye, screening for risk factors in the retina, blood vessels and nerves.

“They discovered a pretty significant problem for Leah and I was so relieved to be there to see the images and discuss the details,” said Heather. “We will be following up with a retina specialist when we get back. The bottom line is that these stations are changing lives for the better for our athletes.”

As a result of the screening, Leah and her fellow Team SONC equestrian athletes, Justin Branham and McKenna Priebe, received new eyeglasses and prescription goggles, customized to fit with a riding helmet.

“Justin had gotten glasses a year prior to us going to USA Games,” said Tonya Branham, Justin’s mother. “I hadn’t realized he had a significant change in his eyesight that we were not aware of. Since he got the new glasses, he hasn’t been complaining of his headaches.”

When asked about her favorite part of competing, Glazer responded that, “it’s on the rail,” meaning that the horse remains on the outer barrier of the arena. “I’m feeling good.”

Back home in North Carolina, the Glazer family will continue training with all the proper equipment, including two medals and Leah’s new glasses.