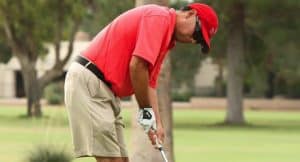 Special Olympics Mecklenburg County athlete and Special Olympics North Carolina (SONC) Global Messenger Jim Cowick has been enthusiastically logging in to SONC’s Partner Up Power Up at-home fitness sessions since its introduction this past fall. The fruits of his labor are obvious, maintaining a connection with fellow athletes and achieving sports goals through the completion of daily activities and weekly challenges.

Since 2008, Cowick has trained and competed in nine sports, including basketball, bowling, flag football, softball, swimming and tennis. With the halt of in-person activities due to the coronavirus pandemic, Cowick joined the Partner Up Power Up program. Motivated through nightly Zoom fitness sessions to reach his goals, he turned in his weekly activity tracker to his coach without fail.

This spring, Cowick was one of 10,000 participants in the Partner Up Power Up program, supporting each other through a statewide network; however, his greatest cheerleader is undoubtedly his father, routinely making an appearance as Cowick’s workout partner on Zoom sessions.

Fitness and fruits of labor are both prominent themes in the Cowick household, as Cowick and his family have cultivated an impressive garden, equipped with the freshest and healthiest produce. Cowick, responsible for preparing the soil, composting and planting, has harvested an array of vegetables, including tomatoes, swiss chard, romaine lettuce, green peppers, broccoli, squash and zucchini. His secret to gardening success is adding worms to the soil.

Though he takes great pride in his ability to grow tasty foods, he acknowledges his most notable feat as winning first prize at a fair in Florida for his carrot cake recipe. A busy culinary aficionado, Cowick also takes time to volunteer with his church, recruit athletes for Special Olympics and mow lawns. In his journey with Special Olympics, Cowick hopes to one day meet a professional golfer or bowler to learn their techniques.

The fruits of those labors continue to grow as Cowick works toward bettering himself as an athlete and a representative of the Special Olympics movement, looking forward to returning to in-person events and competitions, where he is ready to excel.