Home | Feature Stories | From the Foundation Up 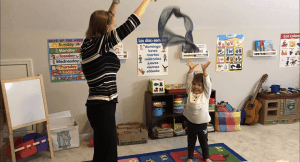 With the temporary closures of park spaces and playgrounds, the essence of imagination is fueling the capacity of play. The name of the game is modification, a challenge that the Special Olympics Young Athletes™ program can help with.

Special Olympics Young Athletes is an inclusive early childhood sports and educational play program for children aged 2 to 7 years old, with and without intellectual disabilities, that includes games and interactive, physical activities.

“Young Athletes is a fun way for children to stay active and establish healthy habits for the future,” says Keith L. Fishburne, president/CEO of Special Olympics North Carolina. “It is important to teach children healthy habits while they are young because it can set the stage for a life of physical activity, friendships and learning.”

Subtracting the element of interaction has proven to be an obstacle, but a surmountable one. The Young Athletes Family Flashcards guide was developed to engage family members and caretakers in playtime activities from the comfort of home.

Offering positive directives and adaptations for sports equipment, these flashcards navigate Young Athletes through the foundational skills of healthy play, songs and games, such as beginner obstacle courses, goalie drills and bowling.

Jillian Geneve, a Special Olympics Young Athletes mother from Chapel Hill, is no stranger to engineering activities at home for her 3-year-old son Charlie.

“We’re very new to Special Olympics,” said Geneve. “I have had it in the back of my mind for a couple of years now that when he was old enough, we would see if it would be a good fit for him.”

After recently learning about Special Olympics Young Athletes from a neighborhood meeting, Geneve took immediate action to get Charlie involved.

“I was having a difficult time doing his physical therapy exercises with him and was worried about how doing them at home was going to go,” she said. “Then the flashcards came in the mail. They’re fun and they have great suggestions about how to set the games up, things that I hadn’t even thought of trying to do. The cards make the activities into games that we get to play together instead of exercises that we have to do.”

For over a year, Geneve and her husband had been practicing the basics of throwing and catching a ball with Charlie. Without much progress to show for their efforts, Geneve took to the flashcards for some much-needed advice.

A newly-popular activity in their household, Geneve swings one of her scarves of many colors in the air by moving it up and down and side to side, all while having Charlie follow the direction of the scarf with his eyes.

The Magic Carpet Ride game has also become a daily staple in Charlie’s routine. In working to strengthen his core, Charlie sits on a bedsheet as he is pulled by his father around the house, resulting in the endearing moniker of “The Sheet Ride.”

“He is getting the same kind of therapy that he gets with his therapists, but in a different way,” said Geneve. “It is so simple and so helpful. I never in a million years would have thought of doing these activities. He just thinks they are hilariously funny.”

While Charlie’s career with Special Olympics North Carolina has only just begun, his family has their sights set on the day he is adorned with his first team uniform.

“That’s something that I’ve had as a goal for him since his first birthday,” she said. “I couldn’t wait until he was old enough to be on a team.”

Luckily for Charlie and his mother, they have come to the right place. Even from home, Charlie is learning the foundational skills that compose each and every gold medalist.