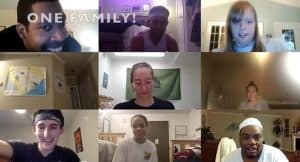 “I would be home alone in my apartment and my roommate would come home and hear me jumping around and screaming, having the time of my life. He was like, ‘Oh, that’s just Josh again doing his Special Olympics thing.”

Josh Boss, alongside Michael Greenstein, serve as co-presidents of Duke University’s Special Olympics College Club, part of the school’s Special Olympics Unified Champion Schools® program, an initiative to promote schoolwide inclusion by joining individuals with and without intellectual disabilities on the same sports teams. Now seniors, both Boss and Greenstein have been volunteering with Special Olympics since their freshman year. A testament to their work in advancing inclusive sports activities on campus, Duke received national banner recognition for the 2020-2021 program year as a Unified Champion School.

A Unified Champion School receiving national banner recognition is one that has demonstrated commitment to inclusion by meeting 10 national standards of excellence developed by a national panel of leaders from Special Olympics and the education community. Greenstein and Boss, have worked hard, not for the award recognition, but for providing an outlet for athletes on campus to simply be themselves.

“It was not only an opportunity to do this volunteering, but it was also engaging in an activity with the athletes as well, which is a great combination for Duke students looking for that outlet, that stress relief,” explained Greenstein. “These athletes are always bringing this awesome energy, I keep going back to that. They’re so happy to be there and competing against one another and working with us, which made the experience so great for me.”

Presented with many challenges to overcome in regard to the coronavirus pandemic, Greenstein and Boss excelled in hosting weekly Zoom sessions for athletes to continue to train and socialize with each other, strengthening friendships along the way.

“That loss of competition was tough,” said Boss. “We were able to run weekly Zoom meetings where we were just silly, loud, upbeat and up-tempo. We were able to lead a sports session each week where we went through exercises related to that sport.”

Working with input from participants, athletes helped to lead sports sessions with student volunteers each Monday night. In addition to training activities, athletes and students took this weekly opportunity to catch up with each other, establishing a real sense of connection.

“A lot of our relationships actually grew deeper as a result of COVID-19, we managed to get through the year with lots of engagement,” said Boss. “The students that were involved agreed that they felt a part of something pretty special. It did a lot for me personally. I would be lying if I said I didn’t do this because it makes me happy and it did over Zoom as well.”

Greenstein and Boss are champions in recruiting volunteers to assist with Special Olympics programming, in person or via Zoom. For students overwhelmed with the pressures of college, an hour a week makes a significant difference for all involved.

“It’s an hour a week of this amazing community that’s not really focused on anything beyond just having a good time with each other, competing in a very friendly environment and just relying on the avenue of the sports to carry that camaraderie,” said Greenstein.

In the midst of a difficult year for so many, Special Olympics was an opportunity to decompress for Duke students and athletes alike.