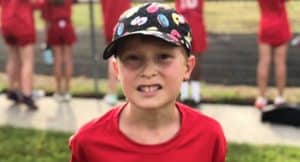 On an average day, Special Olympics Orange County athlete Ethan Porwick can easily log more than 40,000 steps on a pedometer, that’s about 20 miles. Competing and training in athletics, tennis and cycling with Special Olympics, Ethan likes nothing more than to simply move. Also, an athletics superstar at George Moses Horton Middle School in Pittsboro, NC, he has, quite literally, found his footing on the track.

“He used to, actually he still does, run around the backyard in circles,” said his mother, Katie Porwick. “He would run until he was drenched in sweat. Sometimes it would be for hours. It was how he processed information, you could hear him scripting the day or whatever challenges he was facing. He ran his way through it.”

The Porwick family relocated to North Carolina in 2018, finding their way to Special Olympics Orange County and the many individuals who continue to shape Ethan’s life today. In 2019, his first year competing, he won the gold medal for the one-mile event at Special Olympics North Carolina’s (SONC) Summer Games. This year, Ethan was introduced to public middle school, where he was immediately drawn to the cross country team.

“We tried it and Ethan has been loving running for his middle school team,” explained Katie. “This is the first time that Ethan has been able to engage in a competitive sport with able-bodied peers and he loves it, mostly because the team has welcomed him and treats him like any other runner… Special Olympics helped lay the foundation for this great, inclusive experience for Ethan.”

When asked why he likes to run, Ethan replied, “Because I like it, because happy!” Sure, Ethan is happy on the track or running around the backyard, but his happiness is unmatched when watching the NHL’s Carolina Hurricanes compete at PNC Arena in Raleigh. Who is Ethan’s favorite player on the ice? “Aho, because I got a puck from him,” answered Ethan.

Sebastian Aho, centerman for the team, is nothing short of a superhero in Ethan’s book. Aho once tossed a puck over the glass and the lucky recipient was Ethan himself. In between sprints, Ethan makes time to play hockey with the Triangle Special Hockey Association, an organization dedicated to educating, motivating and encouraging individuals with developmental or physical disabilities through ice hockey.

“When he was seven, his neurologist suggested ice hockey,” said Katie. “Explaining that skating was such hard work, that Ethan would be fulfilled just skating, even when he didn’t have the puck. He was right. Ethan has loved ice hockey ever since.”

He shares his love for hockey, and all things sports-related, with his younger brother.

“So, my brother, his name is Oliver and he’s 10 and I’m 12,” said Ethan. “He used to play basketball and soccer and now he’s playing baseball and hockey.” Katie asked, “Is Oliver as fast as you are when you run?” Ethan responded, “Yah, no!”