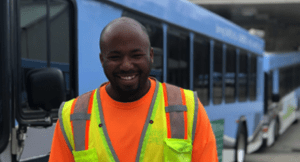 The latest Chapelboro Hometown Hero of the Week Award recipient is Special Olympics Orange County athlete, volunteer and coach, Kwame Alston. Regardless of the role that he is playing, Kwame gives 110 percent.

The Hometown Hero of the Week Award honors extraordinary local people in Chapel Hill’s Chapelboro community. These heroes go above and beyond and often “fly under the radar” for their talents and contributions to their communities.

As one of those extraordinary heroes, Alston’s supporters define him as welcoming, encouraging and helpful by lifting others up when they are struggling. Alston has all the qualities of a strong leader. His sense of sportsmanship, positive attitude and generosity toward those around him is infectious. He is highly respected by his fellow athletes and coaches. If there is one word that describes Alston, it is committed. He even coached a young Special Olympics athlete by running or cycling alongside her on practice runs.

Alston takes his responsibility as a role model seriously by giving back to his community. In addition to volunteering with local elementary school food drives, he currently manages a team that details and cleans buses in Chapel Hill through an organization called Extraordinary Ventures.

“It was just obvious really early on that he was a quick learner with an awesome personality, who is now independently overseeing the whole operation,” said Extraordinary Ventures CEO Paige Morrow.

In living the mission of Special Olympics, athletes, volunteers and fans are charged with the task of making the world a better place, much like Alston strives to do every single day.