Home | Feature Stories | A Picture is Worth a Thousand Medals 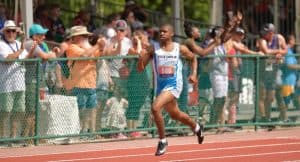 Since he was 5 years old, Special Olympics Wilkes County athlete Ke’Shaun Tillman has been hitting the track and earning awards at Special Olympics athletics events. More recently, medals aren’t all he is bringing back from competitions. Tillman left the 2022 Special Olympics USA Games with three medals, lots of memories, and even more photographs.

The Special Olympics USA Games brings together over 5,500 Special Olympics athletes and coaches from around the United States and the Caribbean every four years. This year, the games were held in Orlando, Florida June 5-12. Tillman represented Team Special Olympics North Carolina (SONC) competing in athletics, while also serving as a credentialed media representative covering the team.

“He’s always loved taking photos,” Tillman’s mother Crystal Carlton explained. In high school, Tillman learned the basics of photography by taking pictures on his phone. Over time, this launched into a passion for photography.

“When I first started taking photos on my first Nikon camera it was pretty awesome,” Tillman beamed.

In 2019, Tillman started working in freelance photography. He took photographs for women’s college and girl’s high school sports, including basketball, softball and soccer. Carlton commented that this focus has allowed Tillman to “really make a name for himself and hone his craft.”

When Tillman met Erin Johnston, freelance photographer and founder of 531 Photography LLC, their connection was almost immediate. Johnston was blown away by Tillman’s ability to memorize technical specifications about cameras and camera cards.

“This kid’s incredible,” said Johnston. “Why would I pass up the opportunity to work with him?”

It was only natural that when Tillman decided to participate in the North Carolina Department of Health and Human Services’ Division of Vocational Rehabilitation Services and needed a photography mentor, Johnston was the perfect fit. 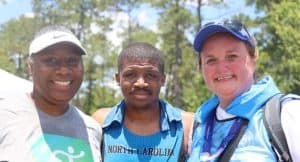 “He really grew with her, he trusted her,” said Carlton. “So, with that trust, we just built a great friendship and now Erin is like a part of the family.”

The North Carolina Department of Health and Human Services’ Division of Vocational Rehabilitation aims to help individuals with intellectual disabilities achieve career success in their chosen field. Throughout his mentorship with Johnston, Tillman had the opportunity to photograph for News-Topic in Lenoir and Mount Airy News and have his work published both digitally and in print.

As a mentee, Tillman explained that one of the best lessons he’s learned from Johnston is photo editing skills. One of his current goals is to improve his freelance graduation photos by learning how to edit out unwanted background objects to better highlight his client.

“I just wish more people would work with this population of amazing, amazing people,” Johnston said about her experience mentoring Tillman.

Johnston has always valued the importance of uplifting people with intellectual disabilities. She even started a program at the school where she teaches called Friendship Fridays. In this program, general education students are paired with special education students with the goal of encouraging students to learn together, building friendship and community.

Tillman makes friends and builds community wherever he goes. Tillman has befriended various photojournalists at events he has worked at and always has friends on and off the field of play. 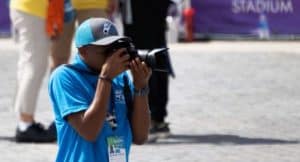 Tillman said he loved “competing against people from many different states.” His mother and mentor loved watching him do what he loves on the track. “I cried when he won that gold medal,” said Johnston.

In the future, Tillman wants to continue to work on his photography and work with more newspapers. His biggest supporters, Carlton and Johnston, know that he will do just that.

Whether he’s on the track or on the sidelines with a camera pointed at it, Tillman has the ability to achieve his goals.