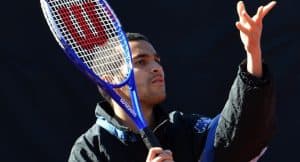 An active competitor in athletics (track and field), basketball, bocce and tennis since 2012, Corwin radiates positivity in his dedication to sportsmanship and Special Olympics. Advancing through the fundamentals of tennis skills, Corwin continued on to play short-court tennis and now competes in doubles and singles on a full court. At the 2019 SONC Fall Tournament in Charlotte, Corwin claimed the gold medal in full-court doubles and singles for his division. With an apparent enthusiasm for the sport, Corwin has made a significant impact on those who share a love for the game within Special Olympics Orange County, including his coach, Rich Green.

“Corwin exudes good sportsmanship and at practices and competitions, he is exceptionally kind to teammates, doubles partners, opponents and volunteers,” said Green. “He always tries his best and speaks positively about their good shots or efforts, regardless of whether they win or lose I am especially proud to be one of his coaches.”

Robb Williams, the namesake of the award, was a competitive tennis player for SONC. Like Corwin, Williams displayed exceptional sportsmanship in every competition. He always showed the utmost respect for his opponents, coaches, teammates and officials. After Williams passed away following a battle with cancer, his family and SONC created the award to honor his memory, his love of tennis and his value of sportsmanship.

About Special Olympics North Carolina
Since 1968, the organization has used the transformative power of sports to improve the lives of children and adults with intellectual disabilities. Nearly 40,000 athletes in North Carolina inspire thousands of coaches, sports officials, local program committee members and event organizers involved in Special Olympics statewide. SONC offers year-round training and competition in 20 Olympic-type sports on local and state levels as well as health and wellness initiatives to improve the health status and increase access to community health resources for individuals with intellectual disabilities. Youth become agents of change through Unified Champion Schools, an education and sports-based program created by Special Olympics to build an inclusive environment among youth with and without intellectual disabilities as well as empower them to become youth leaders and create change in their community. Visit Special Olympics North Carolina at www.specialolympicsnc.com. Engage with us on Twitter, Instagram, Facebook and YouTube.